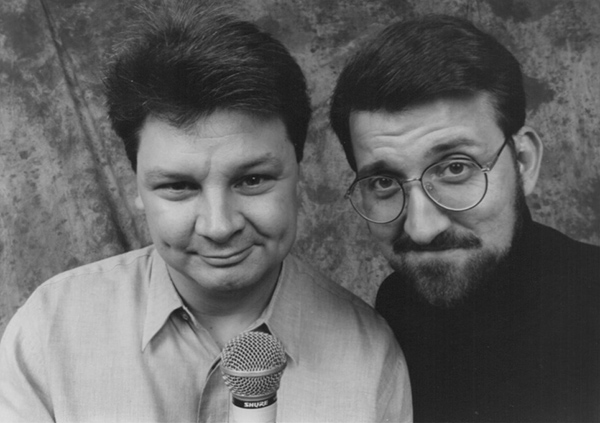 This Los Angeles Radio Guide article about funny radio commercials from 1994 describes how Paul & Walt Worldwide and others are “eliciting guffaws” for radio listeners and “inspiring them not to change the station.”

Unlike most professionals in the broadcast business, radio ad writers hope that their listeners have a short attention span. They’re not after the patient symphony aficionado, the opera buff or the die hard fan of “In-A-Gadda-da-Vidda.” Ad creators crave a different type of audience.

“Just give me 60 seconds, and I will try to make you laugh,” says Paul Fey of Paul & Walt Worldwide.

Fey wants more than anything to surprise and delight listeners, eliciting a guffaw, a mirthful nod of recognition, and most significantly, inspiring them not to change the station during the commercial break.

Fey is one of the wits behind those clever radio ads.

“For 60 seconds at a time, I want to bring radio into the foreground of listeners; consciousness. In fact, I want people to laugh out loud and say, ‘Hey, did you hear that?'”

Fey’s elaborate ads are certainly the attention-getting type. As one half of the production company Paul & Walt Worldwide, which he operates with partner Walt Jaschek, Fey is one of the guilty pranksters behind memorable spots for Miller Genuine Draft, Southwestern Bell Mobile System, GM Parts and Bud Light.

In a spot for Bud, the listener is sucked into the mind of a narrator who describes his eerie, Twlight-Zone-type surroundings.

“I was in a room with curved walls and only a dim light at the top,” the ad begins, accompanied by cavernous sound effects. After 55 seconds of dramatic depiction, the listener realizes the narrator is a Bud Light beer.

In addition to grabbing attention, Paul & Walt’s ad earned a lion’s share of industry awards – nearly 400 of them, including five Ollies (the Oscars of the ad world.) Fey calls this success “world-class advertising” and defines it as commercials on par with the very best radio comedy or drama.

Fey’s criteria for great radio is high. He grew up with his ear glued to the stereo, devouring and digesting thousands of hours of Monty Python skits. This influence is apparent in the hyperbolically silly but highly polished spots that evoke preposterous visual tableaux.

“Like really great radio, a great ad succeeds despite the fact that you can’t fall back on a visual, as with TV,” he said. “In fact, really great ads are great because your mind is able to fill in and make a mental picture many times more vivid than an actual one.”

For Paul & Walt, world-class radio ads consist of equal measures of timing and talent, liberally sprinkled with a daredevil willingness to boldly go where no ad has gone before.

For their radio promotional spots for Fox’s “Star Trek: the Next Generation,” the team regularly poked reckless, wicked fun at Captain Jean-Luc Picards’s stalwart, dignified character. One ad called “We’re Shaving Our Heads” features zesty testimonials from “Star Trek” fans who are happily shaving their heads in a fit of zeal over the show’s syndicated run.

Fey embraces self-deprecating humor in his projects, as well. Some of the ads even ridicule the business of advertising.

For 20th Television, a spot for “Doogie Howser, M.D.” launches straight into a rousing, big-band number, with Andrews Sisters wannabes sining about the new dance craze, the Doogie Boogie Woogie. An earnest voice-over apologizes for the elaborate musical ruse, but there is really no new dance craze, only desperate writers who couldn’t find anything else to rhyme with Doogie.

“It’s hip to be able to laugh at yourself,” Fey said. “It demonstrates that you are confident enough to point out weaknesses. If I have the freedom to allow the consumer to have foibles, so much the better.”

Sometimes, Fey admits, world-class raw material is quite literally written all over the product.

“The Simpsons” provided Paul & Walt with one of their most memorable spots, fashioned after a classical poetry reading. It featured the resonant, velvet voice of Robert Goulet reciting the blackboard writing of young Bart Simpson.

“I will not trade pants with others,” Goulet intones. “I will not eat things for money. I will not Xerox my butt.”

The list goes on, over a background of chamber music, finishing with, “I will not call the principal Spud-Head.”